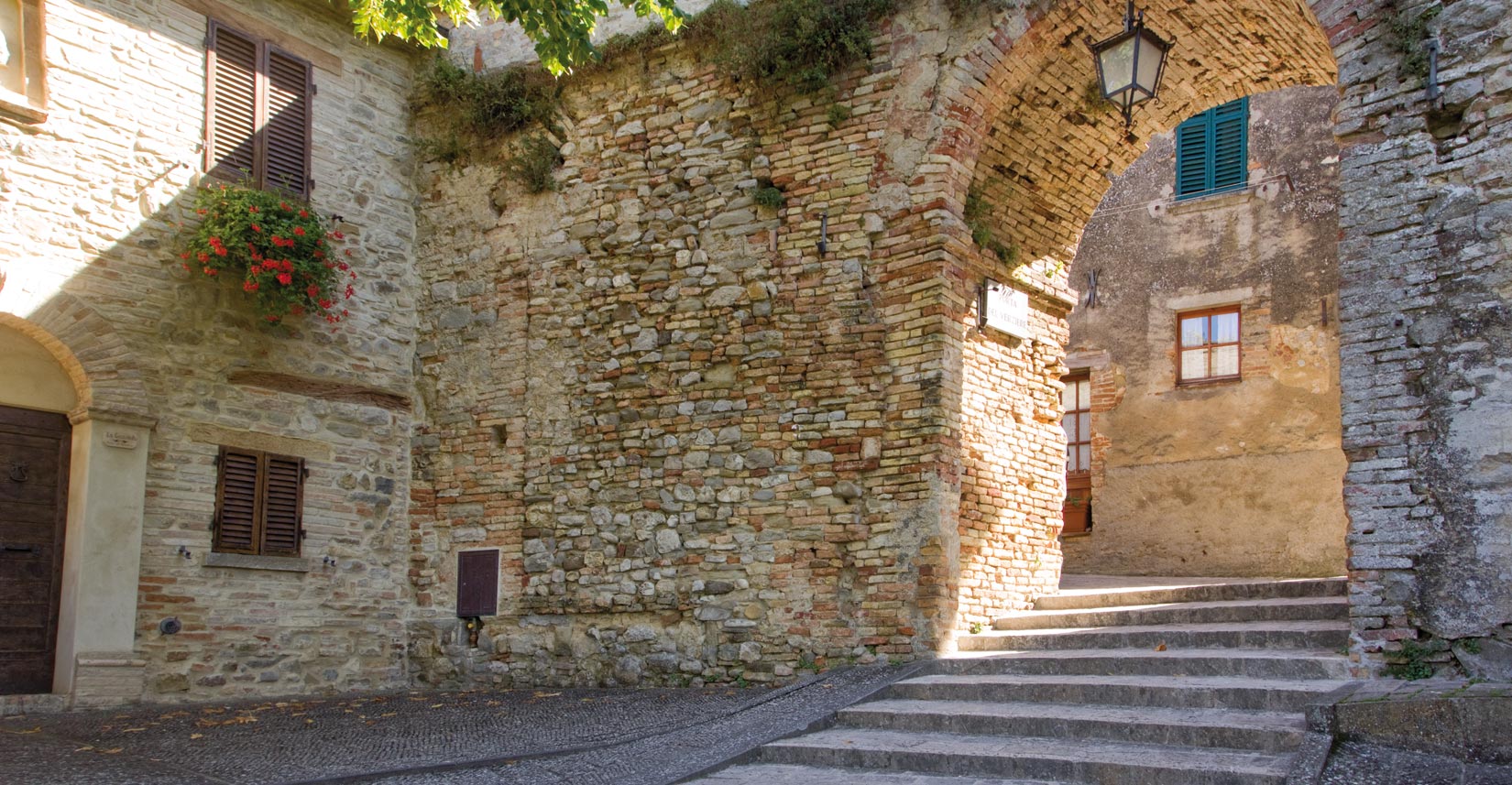 “Montone was built by Umbrian people in the 800s CE during the reign of Charlemagne… It was constructed on a beautiful hill amongst the slopes of the Apennines flanked by the cities of Perugia, Città di Castello and Gubbio. To its east flows the Carpina River, a mile away in the city centre flows the Tiber River and to its west flows a quiet stream called Rio. In the north, the Apennines rise; not abruptly and steeply but so slightly that one can walk for ten miles as if climbing a gentle hill. The climate is temperate and the village is ornate, fertile, graceful and nestled amongst hills, valleys and plains irrigated by rivers and streams. The earth, whether by chance or by design, is as strong as it is beautiful… On one of its two hills to the south, called a “mount” because it is the larger one, stand the fortress and the collegiate. On the other hill to the west, called Castel Vecchio (old castle), stands the beautiful, ancient Church of St. Francis with its Convent of Conventual Fathers… Between the two hills, one can see the square…”

(From a “Historical-genealogical letter of the Fortebracci family of Montone” written by G. V. Giobbi Fortebracci, Bologna, 1679).

Drive southbound on the E45 highway towards Perugia until you get to Umbertide. There you will find a road immersed in the verdant countryside that will take you the six kilometres to the walled village of Montone, the ancient fortress of Rocca d’Aries. The pretty village sits on a hilltop and faces onto a beautiful panorama.

Montone is such a magnificent village that it belongs to the “Most Beautiful Villages in Italy” Club and has been awarded an “Orange Flag” by the Italian Touring Club for excellence in tourism, hospitality and the environment.

It is a classic medieval walled village that has remained perfectly intact and unchanged throughout the centuries.
Montone can be called an open-air monument due to the integrity and consistency of its architectural styles that completely immerse tourists in an atmosphere of ancient times.
Its origins date back to the 9th and 10th centuries CE. In 1368, the most famous member of the Fortebraccio family, Andrea, was born in Montone. He was later given the name Braccio da Montone (Arm from Montone) and became one of Italy’s most famous soldiers of fortune. The building of most artistic significance in Montone is the 14th-century gothic Church of St. Francis that contains many frescos of the Umbrian school. The Civic Museum is housed in the church and conserves paintings, silverworks and liturgical vestments. Two of its greatest 15th-century works are a “Madonna of Mercy” and a “St. Anthony” by Bartolomeo Caporali. Another important religious building is the byzantine-romanesque rural Church of St. George, also known as the Collegiate, which was built in 1000 CE and is the oldest church in Montone. It contains a “Madonna” by Perugino and a precious, silver reliquary where the “Sacred Thorn of Montone” (a thorn from Christ’s crown that was brought back to Venice by crusaders) is kept.
Carlo Fortebraccio, Count of Montone, had received it as recompense for having fought as a mercenary for the Republic of Venice and then donated it to his native town in 1473.

Before joining the Tiber River, the Carpina River meanders for 28 kilometres creating sinuous valleys throughout the hills that separate Gubbio and Città di Castello.
The green meadows, thick woods of Turkey Oak trees and small waterfalls around the walls of Montone and Pietralunga will transport tourists into an ancient and timeless dimension. The Carpina Valley is good for “Leaf Peeping” (viewing and photographing foliage) all year long and offers long, guided walks in search of beautiful seasonal colours. Carpina is also known as the “valley of colours” because during the Renaissance it was home to many mills that produced dyes for the textile industry in nearby Florence.